New success of the online voting platform Decision 21: Belarussian opposition nominated in primaries Nikolay Kozlov as the common candidate for the presidential elections in 2020

The opposition parties in Belarus decided for the first time to choose the most suitable candidate to run against Lukashenko in the presidential elections that will take place in August 2020. To find a solution that would suit everyone, they agreed on using the online platform Decision 21 and D21 - Janeček method of multiple votes. This was the first political use of D21 - Janeček method of multiple votes. Participation 21 prepared the poll according to the requirements of the Belarussian opposition parties. The primaries took place online, anonymously, with the help of SMS verification, and two different voting methods: voting with the traditional one vote of approval and voting with D21 - Janeček method of three approval votes and one disapproval vote.

How did the primaries go?

The primary elections of the Belarusian opposition took place from March 27 to April 30, 2020. According to the assignment, the Participation 21 prepared a vote on the online platform Decision 21. There was a media campaign for the election; anyone who was interested in participating could vote. Given that the election took place during the coronavirus crisis, one of the most significant advantages was the possibility to vote online: there was no risk to the voters. In the end, a total of 4,457 citizens from all over Belarus took part in the vote. The winner, who will represent the Belarusian opposition in the 2020 presidential election, was Nikolai Kozlov, chairman of the United Civic Party.

Kozlov proved to be the best candidate for the opposition in the presidential election against authoritarian President Alexander Lukashenko, as he received support from more than a third of the electorate in both voting methods: 39.8% with one vote of approval and 39.4% with D21 - Janeček method of multiple votes. In the second place, just behind Kozlov, was Yuri Hubarevich, chairman of the Freedom Movement (36.1% of approval with one vote and 37.3% of approval with D21 - Janeček method). Olga Kovalkova, co-chairwoman of the Belarusian Christian Democracy, defended her third place in the online voting (24.1% with one vote and 31.5% with the D21 - Janeček method). Of the total number of voting citizens, 40% were women, and 60% were men. 52.8% of voters were between 19-42 years old. The second most numerous group (29%) consisted of people aged 43-60. Secondary education was reported by 24.4% of voters and university education by 55.2% of voters.

These historically first primaries of the Belarusian opposition are a clear example of the fact that even in the conditions of an authoritarian regime, it is possible to start a democratic process (albeit internal) in a certain way. But as Alesia Rudnik warns, the context in which the primaries took place urges caution that efforts to find the most suitable opposition candidate can be misused to increase the credibility of the upcoming elections without creating a real risk to the Lukashenko regime.

But it has to start somewhere! The Participation 21 is therefore enthusiastic that it was able to participate in this event meaningfully and thus further develop the activities, processes and ideas for which it was founded. If you would like to try the same procedure in your elections and voting or set up the process individually, according to your requirements, do not hesitate to contact us. 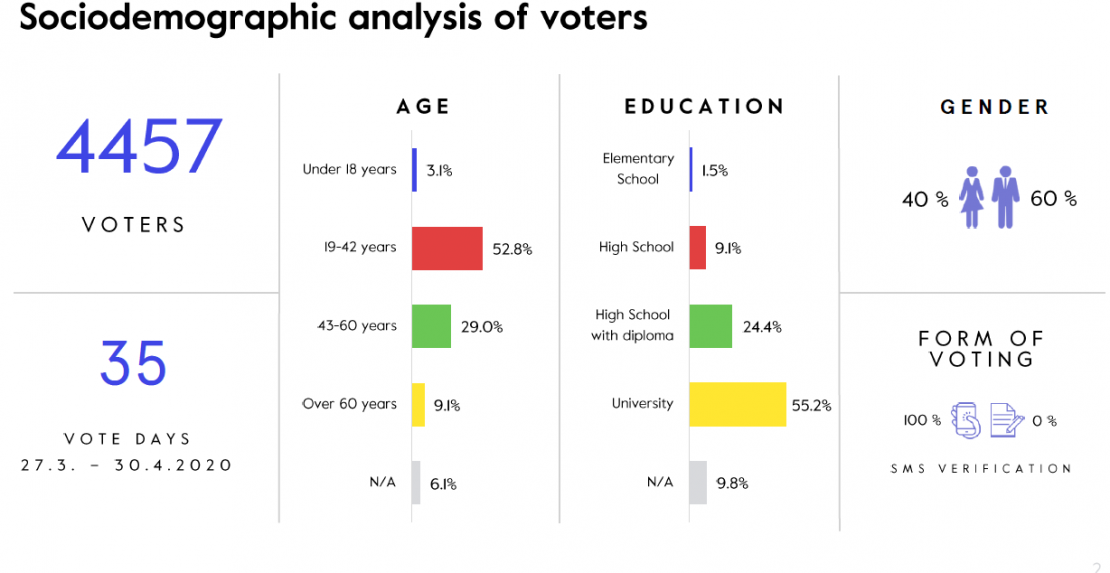 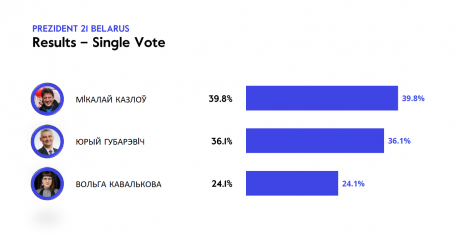